A casual history of the used car 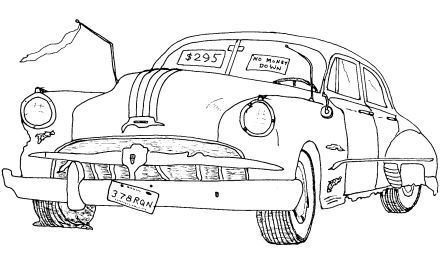 Ever since the first automobiles began to age, the used car
has been a seldom-heralded element of American life.

For decades, starting well before World War II and continuing through the 20th century, roughly three used cars were sold each year for every two new ones: a 3:2 ratio. Hardly a motorist during that period, aside from the well-to-do, had never owned a used car.

For that matter, even the freshest new model on the showroom floor suddenly became secondhand as soon as it hit the street. Furthermore, even those motorists whose auto purchases were strictly limited to new models nearly always sold, or traded in, their "obsolete" vehicles on the busy used-car market.

Nevertheless, the used car has largely been ignored by students and historians of the automobile and of technology. Secondhand vehicles also are bypassed, for the most part, by commentators on American society and culture, marketing, and business.

From the beginning, nearly all of their attention has been focused on the latest car models. Since the publication of Dr. Theodore Smith's pioneering study of used car marketing practices way back in 1941, few works of any magnitude have dealt with any facet of the used car trade, other than those providing "how to buy" advice for the consumer. To read automotive history, then, is to believe that the used car barely played a role in the introduction of the automobile into American culture, and its persistence as a social force.

In reality, it played a very large role indeed. Without the twin attractions (or evils, depending upon one's viewpoint) of used cars and easy payment plans, millions of Americans would have done without private motorized transportation until much later.

Although it is commonly presumed that Ford's Model T brought motoring to the masses, this is not entirely true. The T did allow millions who could not otherwise afford an automobile to become proud owners, at a time when the automobile was coming to be regarded as a "necessity" of modern life. But for millions of poor and working-class Americans, even the lowest-priced, factory-fresh Model T was well beyond their means. Not until prices of the bottom-end Model T fell below $300, in the early 1920s, did they become a possibility for workers - and only for those who were taking home substantial salaries.

Then too, a Model T (or its Model A successor, launched for 1928) was typically the only new car ever owned by many Americans, from the pre-Depression years until well into the post-World War II automotive boom period.

Used cars, when spoken of at all, have typically been treated largely as a joke: an object of scorn, derision, or amusement. Those small businessmen who specialized in their sale soon came to be viewed as prototypes of the shady merchandiser. "Would you buy a used car from this man?" became the sardonic question asked regarding anyone whose machinations were suspect, whether he be presidential aspirant Richard Nixon, a candidate for lesser political office, or the shopkeeper down the street.

Along with its showroom-new cousins, the used car played a major yet unheralded role in making America the capital of the motorcar, and deserves at least a bit of historical "respect" for its role.

In further installments of this series, we'll consider how the market for used cars developed, who bought them (and why), how much they cost in comparison to the new models, and what the Detroit automakers thought about them. We'll also take a close look at the dealers: both the franchised businessmen who handled new and used cars, and the independent dealers who bore the brunt of the nasty comments over the decades, to see if they were really as unscrupulous as many people thought at the time. Hint: Some suffered from shaky ethics, to be sure; others were about as forthright as any businessperson of that day.

Considerable attention will, of necessity, be given to the new-car market as well. Its importance is twofold:
1. The low end of that market inevitably served to siphon off a certain number of potential customers who might otherwise be interested in a higher-cost used car.
2. New and used cars have been tightly intertwined for the past century, because so many new-car purchases involved a trade-in. Thus, neither can be seriously analyzed without discussing the impact of the other.

Along the way, we will be pondering the impact of several trend-setters:
• The 1908-27 Model T Ford, which served as a first car (new or used) for millions of families. As its price fell, Ford's "T" was a bit like the elemental Citroen 2CV (Deux Chevaux), developed decades later, in which millions of Europeans learned to drive.
• Compact cars, introduced by the major U.S. automakers in 1959-60, which offered a new car to many buyers for little more than the cost of an upper-level used model. Independent automakers actually earn credit for early examples of compact design, led by such models as the Nash Rambler and the lesser-known Henry J from Kaiser. Studebaker's compact Lark reached dealerships in 1959.
• Foreign imports, which first became significant in the late 1950s and 1960s, led by Volkswagen's Beetle. (Initial Beetles reached the U.S. in 1949, and its sales began to soar a decade later.)

Also analyzed will be some of the lower-cost new cars that were introduced over the years and could conceivably have become a "people's car," taking substantial sales away from the used-car market. This list includes the nearly-forgotten makes and models that failed, such as the tiny Crosley, the Henry J/Allstate, and the Willys sedan. We'll also consider some that did not exactly fail, but simply sold too sluggishly to have an appreciable effect on the bottom end of the new-car market.

Most of all, though, we'll be talking about pre-owned cars, in their full range. This includes the "jalopies" that put millions of Americans on the road for the first time (and kept many of them there during periods of harder times, whether personally or nationally). At the other end of the scale, we'll ponder the impact of the creampuffs: the late-models that provided deluxe motoring to persons who could not quite manage the price (or payments) of the current year's model.

We have quite a bit to say about that "jalopy" or "clunker" - the derelict used car that provided daily transportation for millions of low-income Americans - considering its safety and aesthetic qualities (or lack of same), as well as its impact upon motoring in general. But we surely won't ignore the one- or two-year- old super-deluxe convertibles and hardtops of a "better" brand, enjoyed just as much (if not more) by its second, third and fourth owners as by its initial purchaser. After all, buying used was the only way some of us ever managed to drive a Cadillac or Chrysler, Lincoln or Jaguar, choosing them over a bottom-line new model or a less expensive (and less deluxe) used automobile. That pleasant phenomenon continues today.

Perhaps most significant of all, though, has always been the ordinary sedan. A little dowdy, a little tattered, at the age of two or three or more it's given substantial unused mileage to millions of moderate-income families who've been more concerned with budgets than glamour. Thus, it deserves, and will receive, the bulk of our attention - though in the 21st century, following decades of dominance, sedans have given way to crossovers and SUVs.

Some episodes will incorporate statistics and historical facts to demonstrate the fortunes of the used car, from its days as a dealer "problem" in the 1920s and 1930s to its acceptance as an integral part of the automotive trade. But it's basically a human story, one that involves nearly every motorist, in the past as well as the present. Therefore, this series looks at these historical developments from the viewpoint of an ordinary motorist. We may even incorporate an occasional fictitious account of a typical used-car transaction at various times, to illustrate the changes in public attitudes through the years. We will also be relating the role of the used car and the low-priced new car to other aspects of family and personal life.

The full story of the used car, we believe, has barely been told. And, sadly, might never be. Interest in used cars inevitably trails that of new models: typically, by a lot. It's safe to say that most people, unless they're in the market for a temptingly-priced used vehicle at present, rarely or never given the pre-owned car even a moment's though. It's just a humdrum commodity to most of us.