Pro-Choice Supporters Rally Across the U.S.

Hundreds of activists march through downtown Chicago,
after gathering in lakefront park, to protest likely
overturning of Supreme Court's 1973 decision on abortion.

May 14, 2022 (Chicago) – Shortly after the "first draft" of the Supreme Court's upcoming decision on abortion rights was leaked to Politico, pro-choice advocates leaped into action, planning events to protest the likely overturning of Roe v. Wade. Though a number of rallies took place that week, major events were scheduled for Saturday, May 14. Organizers advised that the protests in four cities (Chicago, New York, Washington D.C. and Los Angeles) would be the most prominent, but events also were organized in Austin, Kansas City, and many other locations.

Though Chicagoans had endured intense heat for several days, the daytime temperature eased a bit on Saturday, especially near Lake Michigan, where the rally would take place.

Anyone who's attended marches or rallies in the past would instantly recognize the sequence of events. As is the case with protests for other controversial – if less emotionally intensive – causes in a nation severely divided, chants filled the air and signs occupied much of the space.

"Overturn Roe, Hell No!"
"We Will Not Go Back"
"We Will Not Back Down"
"I Am Not Just a Womb"
"Forced Motherhood = Female Enslavement"
"When Abortion Is Illegal Women Die"

One sign (of several using an expletive) suggested the preponderance of young people among the activist group: "You f****d with the wrong generation." So did a certain absence of organizational professionalism, replacing a precisely-scheduled series of actions with passion and – to use a term that's accurate yet often derided these days – authenticity.

Shortly before the program began, we estimated the crowd size at around 200. Half an hour later, we doubled that estimate. By the time the first marchers stepped off the sidewalk onto Chicago's Michigan Avenue, across the street from the city's Cultural Center, even that second estimate seemed conservative.

Patricia Wallie, an organizer for the event, was the first official speaker. Though Ms. Wallie is a longtime Chicago resident, she is originally from El Salvador – arguably the worst country in the world for abortion rights. Having an abortion there, Ms. Wallie explained in impassioned words, is considered a criminal act, thus subject to criminal penalties.

Reading a bit hesitantly from a prepared speech, Ms. Wallie exuded heartfelt horror and passionate concern, along with fury that a Supreme Court case decided nearly half a century earlier (and affirmed several times in subsequent years) was in grave danger of being overturned. 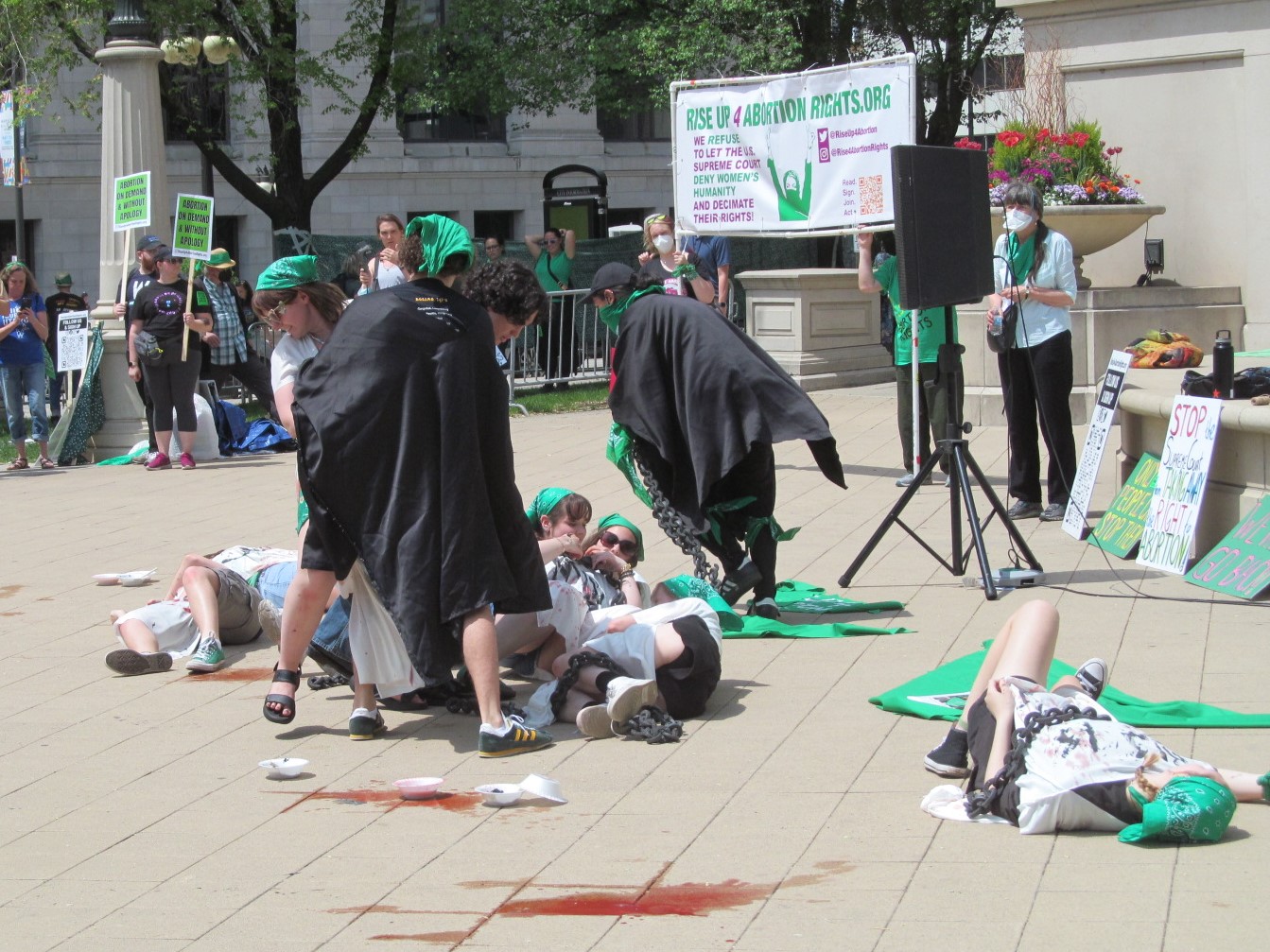 Centerpiece of the pre-march presentation was a short performance, meant to draw attention to the potential for disastrous results when abortion is made illegal. In a group, half a dozen young women begin drawing on large swatches of white fabric, spread out on the pavement, using heavy marker-type pens. Each woman is writing a pertinent slogan on her piece of fabric. Just a couple of words. "My Body My Choice." "This Is Our Right."

Three black-robed people rush in and attack the girls, who are now wearing their slogan-exhibiting expanses of fabric. Simulated chains bind their hands. What appears to be blood spurts to the pavement in a puddle. The young women fall to the ground. They remain there, motionless.

Meanwhile, as the action take place, Ms. Wallie is reading a description of this tale of horror, depicting people imprisoned for abortion in one of the nations that have criminalized the procedure. At one point in the recorded music playing in the background, the lyric refers to "señor presidente." 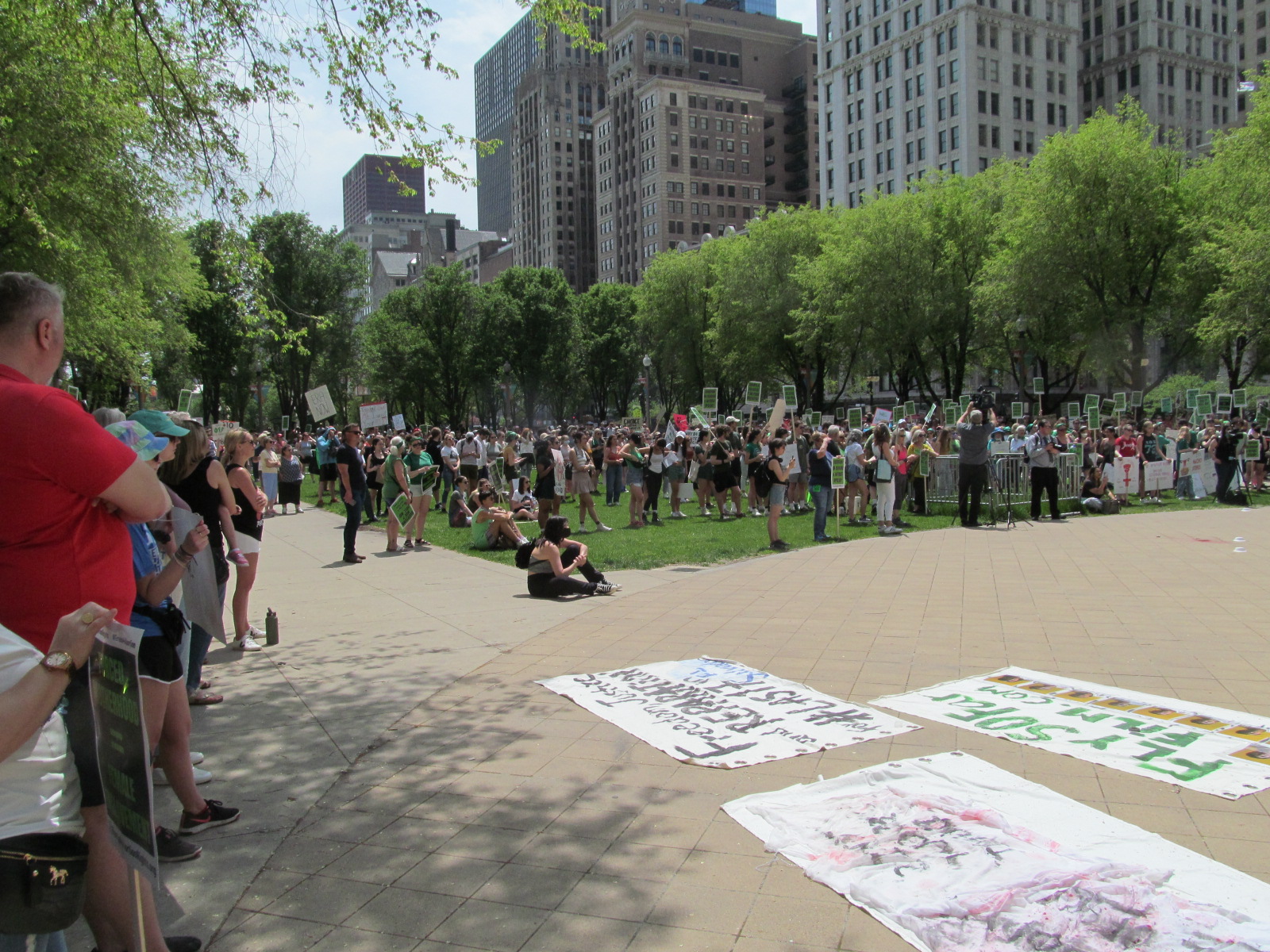 Following this harrowing performance, a woman takes the microphone, introducing herself as a "full-time abortion doctor" at Family Planning Associates. "Abortion is a right," she insists. In Illinois alone, 46,000 pregnant women are in need of such services.

"People's lives are complex," the doctor explains, "and abortion is a lifeline." She then delivers a brief summary of the personal situation faced by several recent patients, some of whom came from a state where abortion is unavailable. "We will care for all of these people."

Days earlier, Chicago Mayor Lori Lightfoot had proclaimed that if Roe v. Wade is overturned, as expected, the city will pay expenses for out-of-state women who seek abortion services and cannot afford the journey.

Next up was man speaking for several Native American tribes. "Women are full human beings," he insisted, but "without the basic right to abortion, people cannot be free."

Before the crowd broke up to begin the march for abortion rights, organizers advised that Thursday, May 19 will be National Walkout Day, aimed at supporters who have a job that would allow them to skip a day's work. One week later, on May 26, will be called Shut Down the Streets Day.

The activists' goal might be summarized by the slogan on one sign: "Abortion On Demand Without Apology." Or, as Ms. Wallie called out, "Rise Up Abortion Rights."

Enroute back home on a commuter train later that afternoon, this reporter happened to sit in the Quiet Car. Because that designation only applies during weekday Rush Hours, two loud-talking gentlemen were exchanging recollections of people they knew in their youth. Their conversation was easily overheard by all. One of them noted that as a baby, he'd been abandoned by a parent, winding up as "a ward of the state." Then, he mentioned a mutual acquaintance who had, as a baby, been put in box and left at a bar somewhere. Not everyone, it seems, views potential birth as an occasion for thankful rejoicing.