Cars for American youths in a period of prosperity 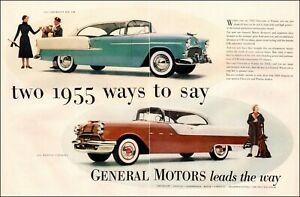 All-new Chevrolet or Pontiac might have been out of
reach for young drivers in 1955, but possible secondhand
a couple of years later. Car purchases highlighted a new
way of life on the installment plan for youths and elders.

During the 1950s, the teenage market for cars was expanding to a remarkable degree. Prior to World War II, the importance – indeed, the presence – of teens had hardly been noticed. By 1955, though, some 200,000 young people were entering the automotive marketplace each month.

The entire concept of teenager was largely a postwar phenomenon. Family life was changing in the newly-developing suburbs. Not only Mom, but the youngsters in the family, were exerting more influence on family-car purchases. Reaching a step further, each of them might already want (or already have) a car of their own, rather than simply sharing the family vehicle.

In The Hidden Persuaders (publishing in 1957), author Vance Packard pointed out just how much of an impact on family-car purchases Mom had. But son (and to a lesser extent, daughter) were now putting their two cents' worth in, too. They might not be listened to, but were often more aware of the features of the new models than were their parents – and undoubtedly had a substantial effect on decisions in a growing number of families. In the Fifties, girls were not yet buying their own cars in large numbers, but that would change soon; and their preferences differed from those of the young males.

Unlike the prewar period, nearly every teen, even if not a car owner, was now expected to drive. Most were intently enthusiastic, eagerly looking forward to the birthday that would permit them to apply for a driver's license. During the 1930s and '40s, in contrast, not even every adult drove, much less every teenager. The number of young folks driving regularly was even smaller in many European countries and elsewhere in the world, especially where bicycle riding was a common means of transportation as well as exercise.

On the other hand, it was accepted that some teenagers could not, due to family and economic circumstances, own or have access to a vehicle. For them, a bike would suffice for a while longer. Or perhaps, the youngster could convince parents that a Whizzer motorbike would be a sensible investment. But having little or no interest in driving at age 15 or 16 often marked one as weird. Especially if you were a boy.

During this transformative decade of the 1950s, how did car ownership by teenagers change from jalopies to late models, and even to new cars? Already by the mid-50s, not only did inner-city "hoods," rowdies, and J.D.s (juvenile delinquents) drive their own cars. A growing number of the "squares" (nerds) in high school managed to acquire their own wheels. Except in especially affluent areas, then, where parents might present a youngster with an automobile as a gift, clunkers often served as a stepping stone into what would be a lifetime of car ownership.

Because automotive desires were already present in the young, their purchasing preferences weren't difficult to direct, by employing the sophisticated marketing techniques that had been developing. Teens and young adults tended to be enthusiastic customers, ready and eager to be sold. For the first time, too, the young foresaw a better life for themselves than their parents had experienced, at least in terms of material acquisitions. Easy credit simply provided a smooth path toward the no-down-payment, suburbanized society that lay ahead. 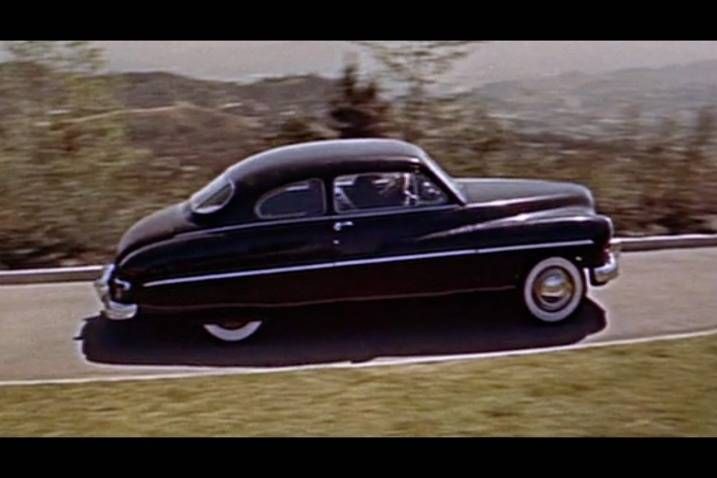 Most teens' cars in the early postwar years were fairly commonplace, not exotic in any way, in contrast to the popular view formed by movies about, or filmed during, the 1950s and '60s. James Dean's jet black, dechromed 1949 Mercury coupe in "Rebel Without a Cause" (left) might have served as a model for many car-crazed teenagers, but reality wasn't quite as striking.

Up to the mid-1950s, at least, most teens were sufficiently content with a $50 junker. Or a customized street rod (hot rod), if that was his choice and he could afford the tab. But now, as prosperity looked more long-term, more young folks were thinking NEW, not unlike their parents. Or at least, late-model. And increasingly, taking action. Some bypassed the clunker stage entirely.

A teen might have savored a red or chartreuse convertible as his or her peak of desire. (So, perhaps, might Dad, though probably secretly.) In the daily world, though, the teenager was more likely to wind up with a dowdy sedan. For every flame-painted hot rod or chopped/lowered custom in the typical high school parking lot, there were perhaps a dozen tired old coupes and sedans, some of them wheezing and clanking their way from home to school. In addition to other obstacles to purchasing the vehicle one longs for, bright red used cars could easily cost an extra $200 or so in the 1950s market.

If not before, the fantasizing teenage boy would surely possess a "good" car when he begins to work full time – almost certainly bought on credit. Car ownership was a prominent reason to have a part-time job, even in high school.

Few teens craved a Buick or Pontiac "dog" in the early- or mid-1950s. At least, not until those makes joined the forthcoming high-performance parade. At that point, once they've shed their family-car image, motorized temptations would reach beyond a Ford or Chevrolet with a potent V-8, toward a power-packed Olds, Dodge, or Pontiac.

By the time automakers began producing a string of high-performance V8-powered models, ushering in the "muscle car" era in the Sixties, more young people were affluent enough to drive one home from the Chevrolet, Ford, or Dodge/Plymouth dealership. Many yielded to the temptation. Even more hoped to sign up to buy one of those sizzling road machines when it turned into a used car, a couple of years later.

High-performance has a downside in terms of safety, though that aspect wasn't stated all that often in the Fifties. Marketing analyst Pierre Martineau, chief of the Chicago Tribune's mid-1950s used-car study, told auto-industry leaders that catering to aggressive impulses was a way to sell cars to teens. Once they began to work at a full-time job, they believed they "deserved" a good car. All they had to do was sign on that dotted line after the first paycheck. Even before high school graduation, plenty of young folks were eager to do exactly that.

Buying that first car on time, the young person is likely to be making payments the rest of his life, on one car after another, each a little newer (maybe better, maybe not) than the previous one.

Meanwhile, as one analyst noted at the time, the used-car market included $500 cars, $50 cars, and $5 cars; and the owners within each group often seemed barely aware of the others.

Postwar clunkers were possible because cars were lasting longer than ever. In 1955, car life averaged a dozen years, almost double the 6.5-year span in 1925. That '55 model could travel about 110,000 miles on average before expiring, versus only 27,750 miles for the 1925 model.

While safety wasn't a priority in the auto business generally, there were concerns about driving by the young. Some experts were more worried about teenagers' driving habits than the age of their cars, clunker-level or otherwise. All the more so as young drivers turned to modifications that gave their cars faster acceleration and/or top speed, and could adversely affect handling. (Installation of "lowering blocks" at the rear end was especially troubling.) American cars would not have mandated seatbelts until the Sixties.

In 1953, the National Automobile Dealers Association (NADA) sought to wipe out hot rods, refusing to sell or service "souped-up" autos, or to sell "speed" parts.

Some clunkerites, it should be admitted, could be notoriously careless or reckless on the road. Others were surprisingly careful, favoring defensive driving and shunning aggressive tactics.

Few safety inspections, initiated by certain states, counties or municipalities, proved successful in reducing the number of old cars on the road, but government officials were still striving to eliminate derelict jalopies. New York City in 1954 buried 672 of them in landfills. A 1955 NADA junking proposal would have given a $100 bonus to a dealer who destroyed a car (any car deemed unfit). The National Automobile Dealers Association kept trying to eliminate those clunkers, but never succeeded. Jalopy bonfires took place here and there, while local trade associations and municipalities spoke of reviving the 1930s junking plans and other disposal programs.

Back in 1948, Chicago's dealers association pledged not to sell cars that couldn't pass the city's safety lane test. That particular safety lane was notorious for corruption and abuses. Teenagers were known to take their parents' automobile through the safety test, and then apply the sticker to their own jalopies.

Through the years and the centuries, in cultures across the globe, young people have been expected to undertake some form of ritual to mark the transition from youth to adulthood. Some have been religious in nature, others secular. In most of America, such rituals had faded away by the time the era of teenagers began. What replaced those traditional rituals? For the most part, it was driving.

To what other ritual might youth have turned? Drink? Drugs? (The latter were far less prevalent than they would become a few years later.) How about "cool" behavior to irritate their elders? Sex, of course. Especially as the Fifties gave way to the Sixties and beyond, those pastimes practically served as markers for youthful behavior (that is, misbehavior). But none of those offered quite the same feeling of power, of potency, as that experienced by a heavy foot on the throttle of an overpowered (or even an underpowered) automobile.

The case in favor of the automobile, and implicitly the used car, has been made repeatedly and strongly. An equally strong case has been, and continues to be, made against automobility, starting right at the beginning of motoring. Advocates of unfettered auto use might disagree, but motor vehicles can easily be accused of ultimately harming youngsters in a variety of ways over the past seventy years or so.

For starters, cars have helped teach and endorse disrespect for the law. To demonstrate that point, all you have to do is consider how Americans (and many others, worldwide) learned to disregard speed limits. Anyone who drives on expressways or open highways knows that countless drivers appear to consider that number on the road sign to be the minimum, not the "limit."

Street racing, especially in certain parts of the country (led by southern California) became a popular, if illegal, "sport" with obvious risks to life and limb. Young men, of course, were especially attracted to the short-lived but intense sensations of power and potency that a hard push on the gas pedal can provide.

On another level, it's well known that cars have for decades added to the dangers of drink and drugs. They also allowed more illicit sexual activity to take place. In return, some of us wonder, what has the car actually given to youth to replace those adolescent-to-adult rituals of the more distant past?


Click here for Chapter 17: Wheels for the Fifties Workingman