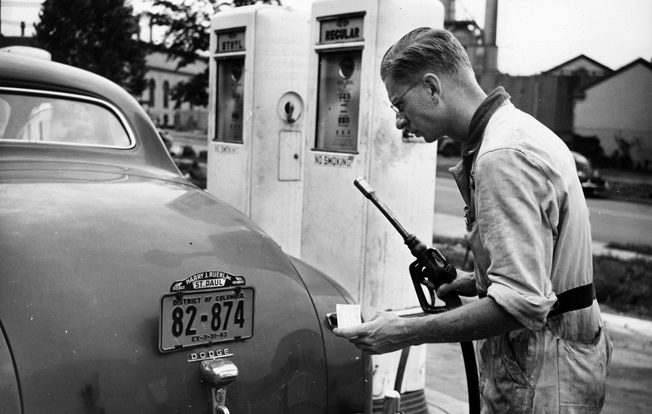 Car production halts for the duration and
civilians face rationing of everyday goods.

During World War II, plenty of motorists got a memorable taste of what it was like to drive an older car. Not just briefly, but for the duration. They also discovered what it was like to be unable to keep that vehicle maintained as well as one might prefer. Once America entered the conflict, even the affluent learned to live with used cars.

Auto sales had been brisk before the war, as the economic woes of the Depression eased. All that changed after the Japanese attack on Pearl Harbor, on December 7, 1941. No new cars for civilian use would be manufactured after early 1942. So, any available used cars on the home front were eagerly snapped up at hefty prices.

Especially in 1945, as the war drew to a close and peacetime didn't seem far off, there was plenty of talk and many articles written about how marvelous the streamlined postwar models would be. Meanwhile, the old bus kept growing older and, quite likely, more troublesome. Until the fighting actually ceased, car owners had to follow the largely-unwritten rules and recommendations that had been established early on. Specifically, take it easy with the old buggy and drive slowly to comply with the law, conserve rubber as well as fuel, and stay within your gasoline/tire ration limits.

Rationing entered the wartime scene gradually, starting in 1942 and subject to periodic modification. Civilians had to accept limitations on a sizable list of food products, as well as cars and fuel.

On the whole, compliance was good. Still, quite a few Americans weren't about to follow those new rules, which were enacted to limit availability of products that would likely be needed as part of the war effort, from steel to sugar. A sizable market for fraudulent ration coupons developed, especially for gasoline purchases. So did other illicit and ignoble methods to circumvent the rules.

Speaking of tires, could they be purchased during wartime? Not much chance unless you knew someone with connections, or you had a very high priority on the rationing scale.

Replacement parts weren't so readily available, either. Both professional mechanics and do-it-yourselfers had to develop more than a little ingenuity, creating new and imaginative ways to get troubled vehicles running again.

Motorists had to develop a tolerance for declining reliability and fading appearance – a tolerance that wouldn't last long past 1945. As automobiles and related items began rolling off the nation's assembly lines in the early postwar years, starting with 1946 models, car buyers with cash could once again indulge themselves.