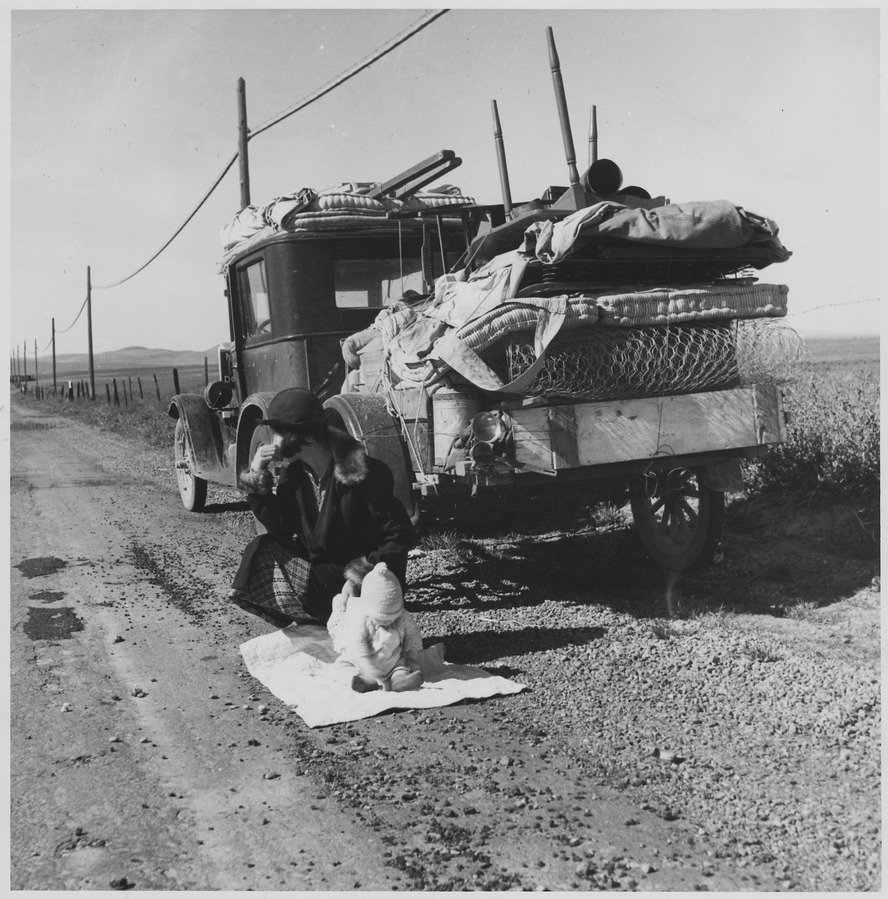 Family car may have been decrepit in 1930s, but
"Dust Bowl" drove economically vulnerable families to
hit the road with hope for better life in California.

Most workers in the nation's cities undeniably faced – and endured – hard times during the Great Depression, especially if they were unskilled or had minimal tangible talents. Professionals didn't necessarily have it easy, either. Long-term unemployment, with little hope for relief in the near future, became the norm.

In the rural south and southwest, loss of employment and income hit even harder, aggravated by the Dust Bowl that decimated farmlands in Oklahoma, Arkansas, and other agricultural states. Typically, farms were occupied and operated not by the landowners, but by sharecroppers – families that owned no property and received no wages, but worked small parcels of land in exchange for shares in the proceeds at harvest time. Not surprisingly, the lion's share of the profits went to the landowners, leaving the 'croppers especially vulnerable in periods of economic uncertainty and turmoil.

As the Depression grow worse and the land blew away (literally), thousands of those tenant farmers, including many who'd tended their section of farmland for generations, gave up and heated west in hope of a better future, likely in California.

How did they travel? Not by train, bus, or plane. They turned to automobiles; namely, to rickety, decrepit automobiles, which they either owned already or strove to purchase at the most minimal prices. In a word, jalopies. Especially, antiquated large automobiles that could hold a big family and, more than likely, a handful of cousins, uncles, grandparents, and perhaps friends who were in similar straits.

In common parlance, those migrants from the Dust Bowl region were often referred to as "Okies," even if they hailed from a state other than Oklahoma. Destination: agricultural areas of California, reached most often via Route 66. That legendary highway ran from Chicago to Santa Monica on the Pacific coast, passing through Missouri, Oklahoma, Texas, New Mexico, and Arizona.

Residents of California and other westbound destinations didn't always – or often – welcome the migrants. State officials wanted them off the road. Period.

Authorities in the American southwest wanted the numerous occupants in those deteriorated vehicles to keep moving, not stop and settle in. Or, failing outright bans, officers sought to block them from entering areas occupied by the better-off. State laws against vagrancy and other "violations" were often trotted out to guarantee that no unwanted invaders would sully their home ground. As depicted in the 1976 film Bound for Glory, with David Carradine portraying iconic folk singer/activist Woody Guthrie, border guards in California could advise entrants that they needed to have $50 in cash in order to enter the state.

California had been dealing with its motorized nomad "problem" as early as the mid-1920s, using intimidating methods to restrict entry. That state was particularly notorious for taking steps, especially along the border with Arizona, to limit and restrict entry. In some cases, when the police and public officials weren't deemed effective enough, vigilantes stepped into action, ready to use intimidation, if not outright violence.

Although the term "Okie" didn't necessarily have racial or ethnic connotations making it offensive, it was most often employed derisively, making it clear that the intruder's presence was unwelcome.

The "Okie" families featured in the film version of John Steinbeck's novel The Grapes of Wrath (1940) represented a segment of the population that many Americans had never seen or encountered. Russian audiences viewing the movie were said to be shocked to see that the truly poor economic migrants depicted on film possessed automobiles.

Of course, a person didn't have to be a migrant, or live in a particular state or region, to be a jalopyist. Through the decades, plenty of jalopies and their owners have resided in big cities, small towns, and along rural byways, in every region of the country. A massive variety of makes and models – just about every vehicle made – has achieved clunker status if it lasted long enough to go through a series of owners before passing from the automotive scene.

A 1933 report from the president's research committee on social trends worried about the rise of "gypsy" and "transient" families, due to mobility that allowed easier residence changes. Other types of nomads seeking work around the country drove deteriorating old automobiles, though the usual image of rock-bottom travel is of carless hoboes, tramps, and vagrants. In both fiction and reality, railroad warriors might be seen clinging to a tank car's undercarriage, or sneaking into unlocked boxcars.

Any vehicle old and tired enough to be affordable to the impoverished, from modest Plymouth to mammoth Lincoln, could qualify as a jalopy. Their owners, similarly, came from a wealth of backgrounds and enjoyed (or endured) a variety of experiences other than geographic migration.

Did the typical jalopy driver have auto insurance? Not likely, though sale of insurance policies kept rising during the Depression. Were those elderly machines safe? In a word, no. How much maintenance was done during the period of ownership? Minimal: whatever was essential, but little else.

How much ingenuity was needed to drive a clunker regularly, whether by a stay-at-home owner or a frazzled, near-penniless migrant? Plenty. Courage? Even more was required.

For a car whose better days were far removed, anything could happen along the American road, including costly malfunctions that could bring the migrant's journey to an abrupt, perhaps permanent, halt.

Was "Safety First" a requirement on the nomad/migrant routes? Not quite. Federal, state and local officials were concerned about safety of used cars – especially worn-out models that undeniably were more likely to have operational imperfections. However, a 1938 accident study showed that 4.9 percent of all accidents were indeed caused by defects, but not necessarily due to a car's age. In a 1939 Connecticut study, the oldest cars actually had the best safety record.

In a small-scale 1936 study, just 3 percent of accidents were "attributed to defective equipment." One almost had to wonder if better driving habits might be as important as physically safer cars.

In 1938, the National Automobile Dealers Association advised that more that more than 11 million cars in use were worth $50 or less (a surprisingly high figure). One analyst/author determined that 14.2 percent of cars (3.3 million) were valued at $25 or less, while 8.5 million were worth no more than $75. According to the American Petroleum Institute (API) in 1939, more than 8 million automobiles on the road were worth less than $100. Whatever the estimate, it was clear that plenty of minimal-value automobiles were plying the nation's roads and streets.

Jalopy shoppers of any sort nearly always transacted with the lowest-level dealers – typically, the ones that made the most outlandish claims about the quality of their products. Misrepresentation and outright fraud definitely occurred at that end of the dealership spectrum. On the other hand, for a $20 or $50 car, it might not be worth any dealer's effort to be deceitful or misleading, Not much profit margin there.

Maintaining a jalopy during a cross-country trek required a degree of automotive knowledge, especially of mechanical and electrical matters. When contemplating a purchase at the lower end of the price scale, careful, meticulous inspection was mandatory. Shoppers had to ponder condition carefully, and weigh the likelihood (or impossibility) of any level of dependability. Clunker owners might also face the prospect of falling victim to scrap drives, as well as forced final trips to the junkyard or the crusher.

Clunker owners had one simple objective: make that old wreck last another day, another week, another month or two. Maybe even a year. Somehow.

Most long-term clunker drivers, nomadic or stay-at-home, had to learn to improvise, in order to maintain a semblance of dependability and safe operation. They needed to know just how to apply brakes that possessed little frictional material on their lining. They learned how to steer a car that "pulled" to the left or right (or most troubling, alternated between the two. Drivers and passengers needed to ignore odors and noises that might be annoying but didn't hurt "the running" of the car, as fictional patriarch farmer Jeeter Lester proclaimed in Erskine Caldwell's novel and film, Tobacco Road.

Ever since Model T Ford days, America had become a nation of backyard mechanics and roaming "technicians," who could undertake at least rudimentary repairs to engines, transmissions, and chassis, with few tools required. Upkeep had to be undertaken the hard way, searching for ways to stretch car life to the limit and beyond. Drivers had to know how rough a car could be and still run somewhat reliably.

Naturally, cars of the Thirties were far simpler than those produced in later decades – especially after microelectronics, chips and computers entered the picture full-bore, in the 21st century. The oldies had no emission controls, and only the most elementary electric element. No electronics. No power accessories to go bad or wear out. On most vehicles, little or nothing stood in the way of getting at the engine, with sufficient work space to adjust/replace ignition points, adjust/clean the carburetor, clean/adjust or replace spark plugs, and most other maintenance tasks.

Tires still contained inner tubes. Even "baldies" could be bought: used tires with little or no tread remaining. Brake systems were simple and amenable to adjustment, though the basic principles remained the same into the 1980s and beyond, even when front discs (rotors) replaced drums and such assists as anti-lock braking emerged.

Windows had to be hand-cranked up and down. Simple heater systems consisted of little more than an electric motor and blower setup. Nothing was powered or automatic, radios (if so equipped) held vacuum tubes, and the first auto air conditioners were a few years into the future. Meanwhile, for cool air on a hot day, a raise-up cowl vent directed airflow into the passenger compartment. One person with a fair amount of knowledge actually could work on nearly any car. No specialists need apply.