Chapter 11: Wheels for the Workingman 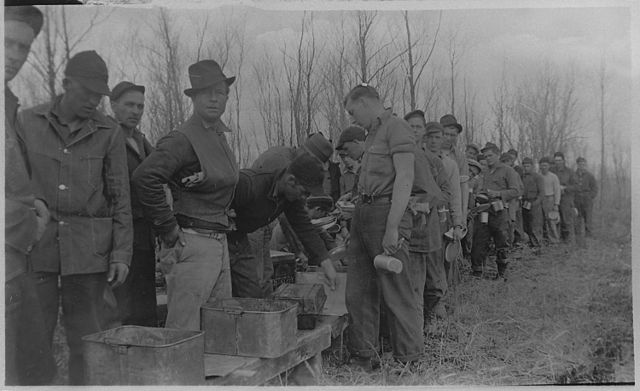 Civilian Conservation Corps workers line up
for food in Minnesota. Working-class Americans
are hit hard as the Depression continues through
the Thirties.

One economic factor made it possible for Americans at or near the bottom of the pay scale to own vehicles: Depreciation. Namely, depreciation of used cars. Because automobiles declined steadily in value over their lifetimes – from new model all the way to jalopy status – a given vehicle could provide transportation for an affluent initial owner; a midlevel family or two; and finally; an impoverished household.

A 50-city study of vehicle ownership in 1933, the worst year of what came to be called the Great Depression, found that 37 percent of urban families making under $1,000 per year owned cars. To narrow it down a bit, 30.5 percent of those earning less than $500 annually were car owners, versus 44.4 percent of families making $500 to $999.

About one-third of cars in use were owned by families with incomes less than $20 a week. In 1937, families earning $20 to $30 per week owned a total of 12 to 13 million automobiles. Four years later, just prior to U.S. entry into World War II, more than 14 million cars were owned by people earning less than $30 per week.

Some locales were far more car-based than others. A Department of Labor survey of low-income families (circa 1937) found that 68 percent of those in Detroit had a car, versus only 15.2 percent in New York City.

During the Depression years, some cash-strapped families learned a lesson that would be even more vital a decade or two later. Even if a low-wage worker managed to obtain credit, those "easy" payments were going to be mighty hard to make every month. Or, for the less creditworthy, every week.

Installment payments were growing in importance, though, not only during the glitzy Twenties but through the Depression decade. In 1938, one of the economy's lowest points, a whopping 60 percent of used cars were sold on time.

When Staughton and Helen Lynd published Middletown Revisited, a Depression-era follow-up to their 1920s sociological study of Muncie, Indiana, they'd learned that cars were just as important to family life in the mid-Thirties as they'd been in better days. Actually, more so, and growing rapidly in importance. Though the term wouldn't be an element of the working-class lexicon until the Fifties, owning an automobile was part of the "American Dream." Having a car at hand was also a way to provide satisfactions not found in one's job.

Naturally, not many manual workers or office toilers could drive home a new automobile during hard times. A workingman bought his auto second-hand; or, more likely, third-hand, if not beyond. He couldn't do that unless cars were more reliable and long-lived than they used to be, which they were (more or less) by the 1930s. So, they promised substantially more available usage.

What kind of vehicle attracted the typical American worker? Tons of Model T Fords were still running; and even more Model As (built from 1928-31), as well as family-friendly rivals from other manufacturers. Or, the cash-strapped worker could instead get a "better" make used – a car of high quality when new, which was now somewhat faded and enfeebled.

Enticing, colorful advertisements depicting glamorous surroundings and adventurous experiences, especially in magazines, doubtless had quite an impact on middle-class and affluent car shoppers – prospects for a brand-new automobile of a desired brand. Used-car buyers, especially those shopping for bargains at the back of the lot, were bound to focus on more practical enticements.

Commuting was already a fact of everyday life for many Americans. How many wage-earners drove to work in the 1930s? A 1936 Public Roads Administration study showed that 7 our of 10 surveyed workers used an automobile to get to their jobs.

Ownership costs added a pretty penny to the price of the car itself. In 1941, the average operating cost of a new medium-price car came to 4 cents per mile ($363 per year), based on a $900 initial selling price and 16-cent/gallon gasoline. One-third of motorists in that year managed to spend less than 2 cents per mile.

In 1940, a national plan for time payments of auto repairs was announced. As America entered World War II, between 7 and 12 percent of average family income went toward automobile ownership and use.

Was a car really necessary in the 1930s? Did most people have options? Urban dwellers still relied on streetcars, and the sprawling suburbs wouldn't begin to sprout until after the war. Rural and semi-rural folks typically had more public transit options than their modern-day descendants, but a private automobile certainly expanded their travel possibilities. As for earning extra money with a car, that was clearly a benefit for many, but by no means all working-class motorists.

As the Thirties moved along, the Roosevelt administration initiated a wealth of programs to provide government-run employment, as part of the "New Deal." Men hired by the Works Progress Administration or Civilian Conservation Corps, typicall at remote locations, had little need for an automobile.

In 1934, William B. Stout, best known for the experimental, futuristic car that bore his name (the Stout Scarab), noted that America had gone "performance crazy" and economy was "virtually forgotten." A couple of decades later, as the postwar"horsepower race" began, his warnings would be considerably more valid.